Every year during Graduation week, Middlesex University celebrates and rewards the achievements of some of its alumni and other individuals who are shining lights in their field of expertise and have made a significant contribution to society.

Summer 2018 is no different. During the week ahead, the University will award Honorary Degrees to outstanding people and recognise their achievement at the highest level as well as their dedication to public duty and making a difference to the lives of others.

“I am delighted that we are honouring such exceptional achievers at this week’s graduation ceremonies. Our honorary graduates are role models for our ambitious students and it’s a great privilege to welcome them to the Middlesex family to be part of our future success.”

The week kicks off with an honorary degree being awarded to musician Imogen Heap. Imogen is a self-produced and independent musician, who has pioneered the use of technology such as blockchain to empower artists. 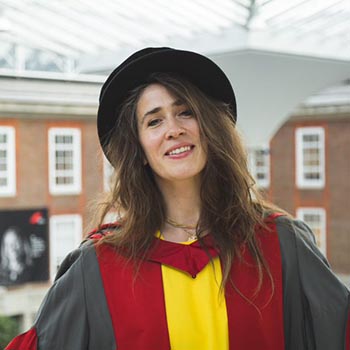 The respected musician has penned songs with Taylor Swift, Mika and Josh Groban among others. She has been nominated for five Grammys, winning one for engineering and another for her contribution to Taylor Swift’s album 1989. She also wrote the entire score for stage show Harry Potter and the Cursed Child, which has set new standards in theatre.

Imogen has a long history with Middlesex, and has worked with our students on several occasions. MDX product designers created her Listening Chair and in March 2017 she worked with students on a song writing workshop. She said: “I’ve always felt inspired, encouraged and supported by the University in the work and play we’ve done together and am deeply honoured on being recognised in this way. I look forward to the next chapter of our explorations”.

Anne Boden studied for her MBA at Middlesex from 1987 to 1990 while working at Standard Chartered. After a distinguished 30-year career in traditional banking she set out to build her own mobile-only bank from scratch in 2014. Starling Bank launched its personal current account in May 2017 and business bank accounts in March 2018. Less than a year later, it was named Best British Bank in the Smart Money People Awards. 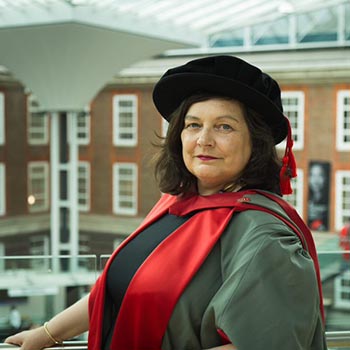 It was during Boden's time as Chief Operating Officer of Allied Irish Banks in 2012 and 2013 that she began to explore the potential of financial technology for transforming customer’s everyday lives and set out to create a new kind of bank.

Since graduating, she has remained a strong supporter of Middlesex, serving on the Board of Governors in 2011. Commenting on her Honorary Degree she said:

“When I first stepped through the doors of Middlesex University as a young banker in 1987, little did I think that I would one day build a bank from scratch. As I fought my way through bureaucracy, in-built prejudices and widespread suspicion to get Starling funded and off the ground, I was so grateful for the lessons I learned at Middlesex.” 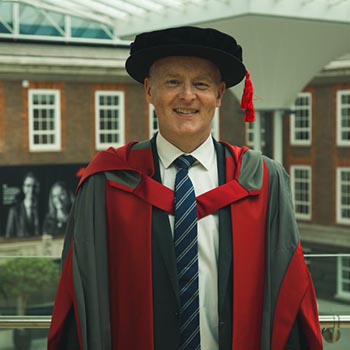 He was a member of the Board of Middlesex and is currently a Trustee of Loughborough University Students Union. He has been involved in supporting public sector organisations facing transformation as a Non-Executive Director in the social housing and education sectors.

MDX academics in the Business School designed a Masters degree with the Worldpay Academy that aims to build leadership and management capabilities.

He expressed his honour at receiving the award from Middlesex:

“The University has been at the forefront of work place learning and finding creative solutions to business challenges.

"I have seen the real difference that working with the University has created in the workplace”.

Joy Warmington is CEO of brap, a charity transforming the way we think and do equality. 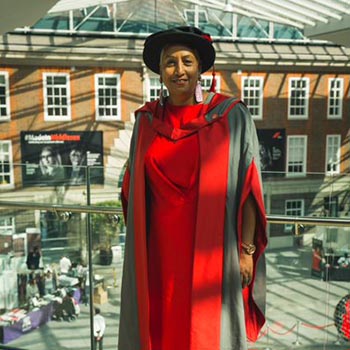 The charity has supported organisations including NHS England, Macmillan Cancer Support and the Department of Education.

Joy has worked in the community sector, local government and further education.

Joy said: “It’s a great honour to be awarded a doctorate by Middlesex University. Over the years, we have found research produced by the University’s Business School invaluable in our work supporting organisations to become inclusive.

"I see this award as another sign of the University’s commitment to equality, and a vote of confidence in brap and our work.”

Caroline Alexander has a career in nursing spanning over 30 years. 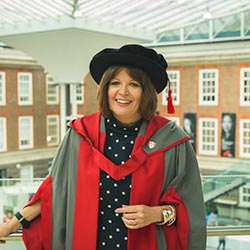 Caroline has specialised in nursing older people in Scotland and in London. In 2004 she took up her first Director post and is currently the Chief Nurse for Barts Health. In 2008 she was a Florence Nightingale Leadership Scholar.

Commenting on her Award she said: “I feel truly honoured to receive this Honorary Doctorate.

"The partnership I have developed with Middlesex University during my time at NHSE in London and more recently at Bart’s Health has underpinned much of the innovation we are bringing to nursing across the capital through Capital Nurse and locally in North Easter London through education and research.”

David Blunkett was awarded a peerage in the dissolution Honours List in 2015, taking the title of Lord Blunkett of Brightside and Hillsborough in the City of Sheffield. He was an MP from 1987 to 2015 and was a Cabinet Minister for eight years under Tony Blair, running high profile departments such as Education and Employment and Work and Pensions and serving as Home Secretary from 2001-4. 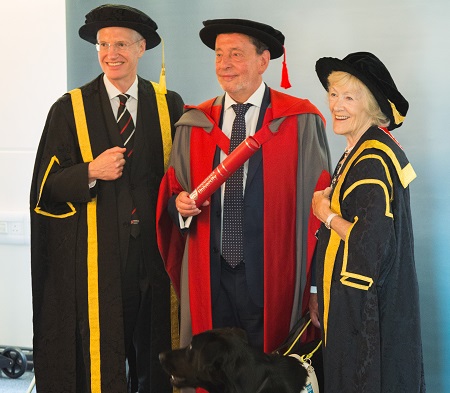 He is a passionate advocate for the well-being of young people and knows first-hand how education can transforms lives.  He was educated at evening class and day release from work and graduated from Sheffield University as a mature student in1972.

On receiving his Honorary Degree, Lord Blunkett said: “It is a great honour to be recognised by Middlesex University in this way. I'm impressed by the University's commitment to the impact it can have on its own community and the wider world.

"With 140 different nationalities represented in the student body and a determination to make both teaching and research relevant to the modern world, this is indeed an excellent example of a modern university delivering access to all, and an experience relevant to the world of tomorrow.

"Celebrating 140 years of education from St Catherine's College through to the modern campus at Hendon, the University is delivering to students a foundation which will carry them through a period of the most enormous economic and social change. I am very proud to have been here today."

Mark Lewis studied BA Law at Middlesex Polytechnic between 1984 and 1987, qualifying as a general commercial litigator who did a bit of “libel and a bit of privacy”. 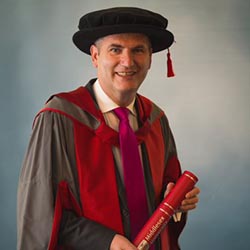 Along the way Mark undertook cases that were part of the need to reform libel law, obtained the first reported “super injunction” and, according to the New York Times, invented the Tort of Phone Hacking, negotiating the largest settlement in media law - £3 million - contributing to the closure of the News of the World.

Mark has been profiled in newspapers in four continents and appeared on television in all six.

He said: “I am delighted to be awarded an Honorary Doctorate from Middlesex University, which is where I learnt about law and the importance of finding the answers to the problems that exist”. 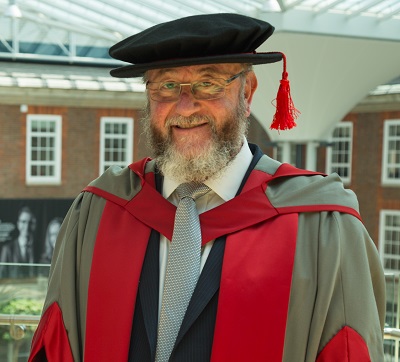 Chief Rabbi Ephraim Mirvis is in his fifth year as Chief Rabbi of Great Britain and the Commonwealth.

He has developed a reputation as a principled spiritual leader who has broken new ground in the areas of Interfaith and Social Responsibility.

He is a champion of faith communities which strike an essential balance between the particular values which make them unique and the universal human values which we all share.

Upon receiving his award from Middlesex, he said: “This is a great honour which I am privileged to accept on behalf of the wider Jewish community, which has so often found in Middlesex University a real partner in social and communal responsibility. I look forward to cultivating that warm relationship for many years to come”.

Penny Melville-Brown was the first woman barrister in the Navy and was promoted to Commander, but blindness ended her career early and she is now a war pensioner. 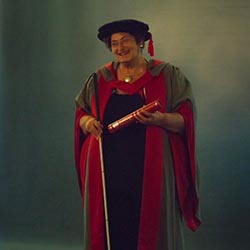 Undaunted, she has run Disability Dynamics for nearly 20 years helping other disabled people to get back to work.

Most recently, she started her Baking Blind YouTube channel to demonstrate that disability is no bar to ambition.

Now nearly recovered from a major car accident in 2017, Penny has broadcast over 50 videos of her life-changing adventures and culinary partnerships to a growing international following.

Commenting on her award she said: “I am hugely grateful to Middlesex for recognising that work in the disability field has both national and global significance.

There are some one billion blind people around the world who struggle to fulfil their potential. Every one of us can make a difference by turning inclusive attitudes into tangible practical action”.

Edward Barber & Jay Osgerby founded their first design studio in London in 1996. Their diverse body of work spans industrial design, furniture, lighting and public commissions such as the London 2012 Olympic Torch and projects for the Royal Mint. 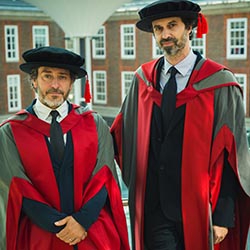 They are currently working with leading global manufacturers including Vitra, Knoll, B&B Italia and Flos.

Edward and Jay’s work is held in permanent museum collections around the world including the V&A and the Design Museum in London, Metropolitan Museum of Art, New York and Art Institute of Chicago.

In 2007 they were awarded Royal Designers for Industry by the Royal Society of Arts and in 2013 the designers were each awarded an OBE for their services to the design industry.

Commenting on the their award the designers said: "It's a huge privilege to be awarded an honorary doctorate from Middlesex."

"The Faculty has a fantastic international reputation and we’ve always been aware of the high level of creative output and the quality of the degree shows.

“We’ve employed people from the Middlesex Architecture course in the past and our message to students is to be ambitious”.