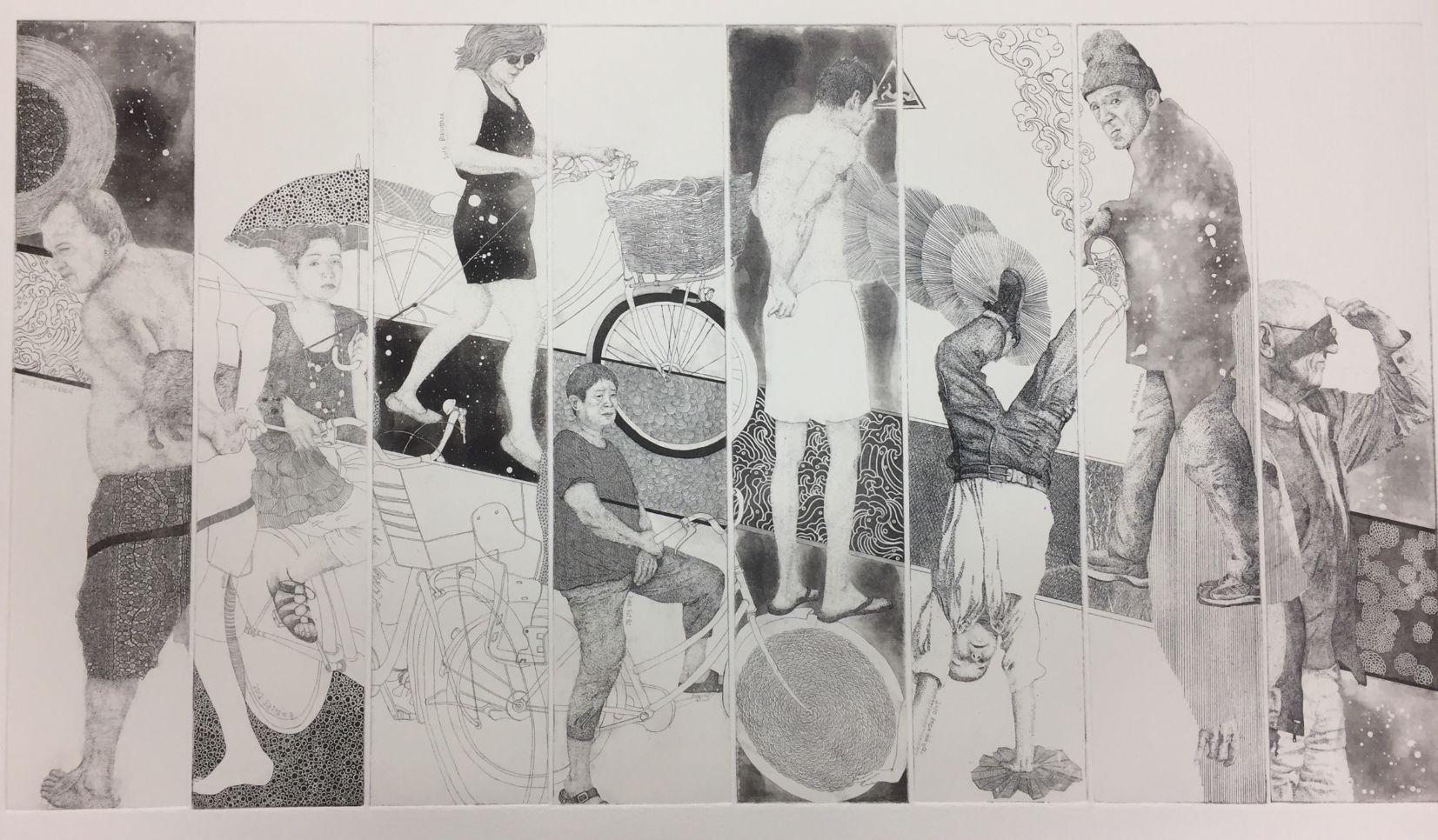 A Middlesex printmaker who graduated from the Master’s programme last summer has won three major prizes: Printmaking Today’s State of the Art prize for student printmakers, the Gwen May Recent Graduate award - including associate membership of the Royal Society of Printmakers - and the East London Printmaking Press prize at the National Original print exhibition.

To cap a triumphant year, Wai Wong has also had works selected for the Clifford Chance printmaking exhibition, the Masters: Screen & Stone exhibition, the Bainbridge Open, Barbican Artworks Open 2018 and Woolwich Print Fair and is currently completing a residency at City & Guilds. Printmaking Today has published a profile of him, hailing him as a promising talent who has “demonstrated an outstanding engagement with the medium of print”.

Wai, who prior to MDX worked for a decade in commercial TV production in his native Hong Kong, took up printmaking after enrolling in a four-day etching course which, he says, “blew my mind”. He is a keen photographer and bases most of his drawings on photographs he has taken with a 35mm film camera. He favours traditional print on paper, experimenting with woodcuts, different etching techniques, and screenprinting/etching to produce highly detailed, sometimes hyperreal works. 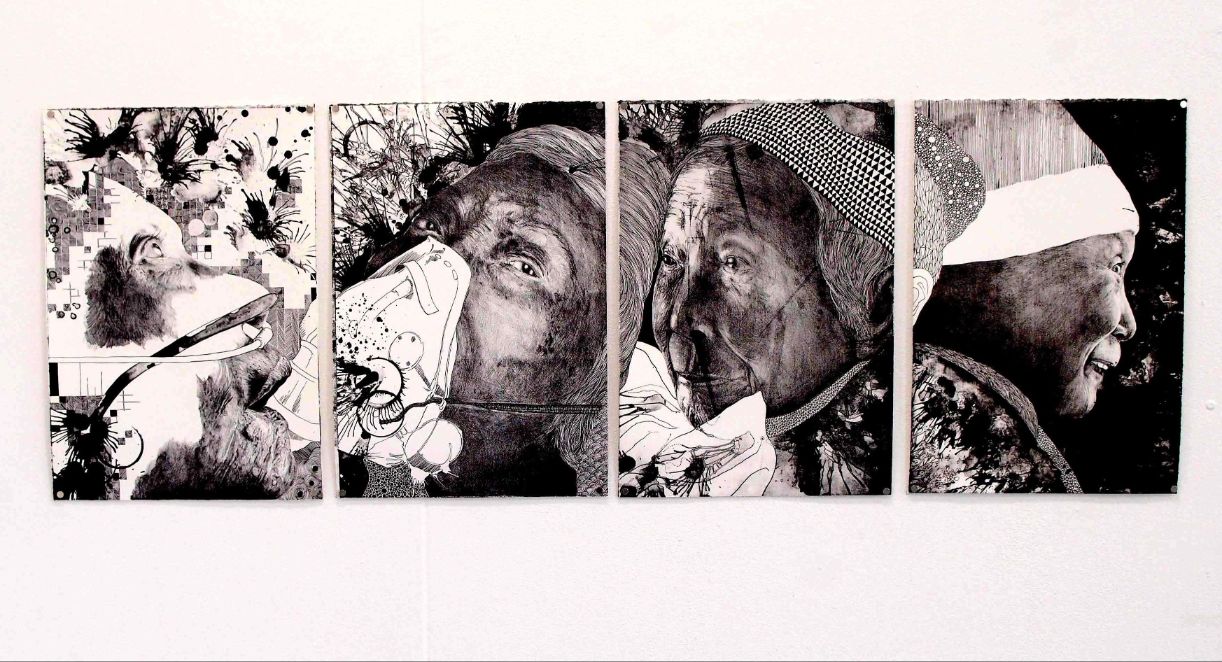 Wai’s award-winning work includes a poignant series of black and white lithographs of his grandmother in the final months of her life. Other subjects include assemblages of people he has spotted on the street in his Strangers series, and elements of landscapes seen on his travels to countries including the US and Japan.

Wai studied at MDX alongside his girlfriend, who has just graduated with a Master’s in Illustration. He is delighted by the standard of the printmaking facilities and the helpfulness of the University technicians. “It's really simple - I came in at 9.30 and stayed in the workshop. Everything's really efficient - I didn’t need a scheduled meeting or have to wait”.

He praises his tutor Steve Mumberson for giving students a free hand – “he doesn't say you have to do this, you have to do that” – but also for pushing him, as time went on, to try a more relaxed style.

Pro Vice-Chancellor and Executive Dean of Arts and Creative Industries Carol-Anne Upton calls Wai’s success “a real credit to Steve Mumberson and the MDX Printmaking Department. Wai’s work is amazing and I am sure that this is just the start of many accolades for him”.

Wai, whose heroes include Henri Cartier-Bresson and Czech-French Magnum photographer Josef Koudelka, is applying for the Royal Academy Schools postgraduate programme and hopes to remain in the UK to develop his career beyond the expiry of his visa in February. About his art practice, he says: “I'm still trying to find a way. At this moment I feel I'm very green". 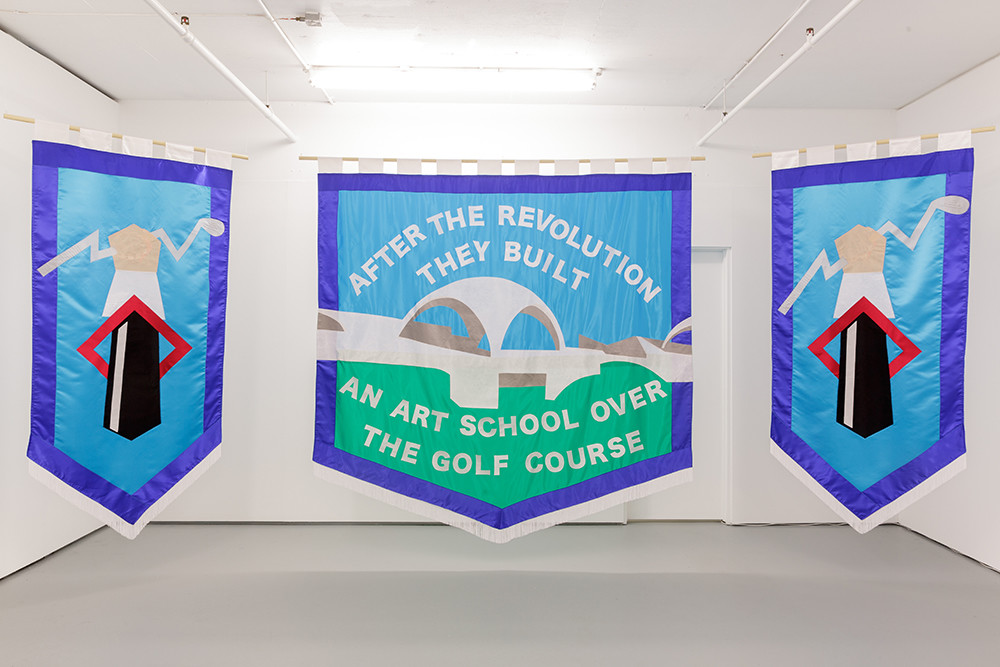 Artist and activist Chris Alton makes work in a variety of media that offers social and political commentary with a humorous edge. New Contemporaries has chosen a heraldic-style banner triptych, with the work’s title - After the Revolution They Built an Art School Over the Golf Course, a reference to Cuba’s National Art Schools which was built on the former Havana Country Club – emblazoned on the central banner. The work relates to Donald Trump’s cuts to arts funding and a more general plea for spaces for critical thinking.

Chris says he finds it “incredibly exciting” to be part of the graduate show with the “longest, most substantial legacy”. He chose MDX because he was looking for a Fine Art programme which was non-discipline specific, and the seeds of his political interests were nurtured on the course. He is particularly grateful, he says, for tutors hosting morning informal discussions about current projects and their support for student exhibitions alongside a philosophy of letting students figure out for themselves what they are doing.

He has also had a work in exhibition Survey, now touring around England and Wales. For 2019, he has a commission from Eastside Project in Birmingham and will be doing a workshop for a community play.

Alkaios Spyrou, who graduated in 2017, has his short film Anina on show. Shot on board a container ship crossing into the Baltic Sea, it considers the link between international trade and migration sparked by climate change, reflecting his interests in psychogeography.

Alkaios says he feels "forever grateful" to his "honest and passionate" lecturers. "They collectively nourish the intellect of their students and help them reach their true potential, in increasingly difficult [political] circumstances". He is currently studying for a Master's in Artistic Research at the Royal Academy of Art in The Hague. Anina will feature in the 14th Prague Short Film Festival in January. 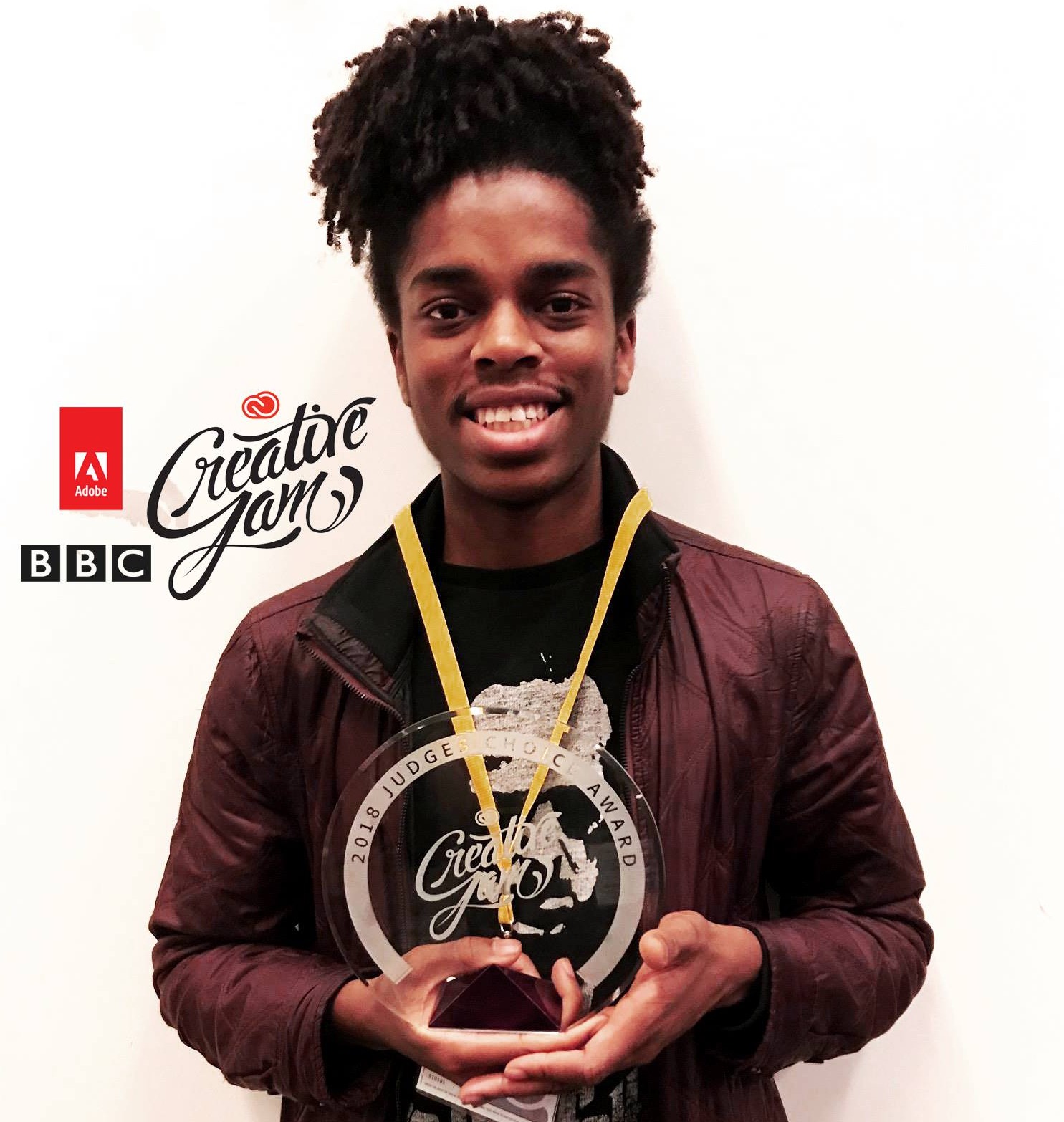 Second year animation student Zachary Aghaizu was in the team that won the judges' prize at the inaugural London Adobe Creative Jam - part of an international events series set up by Adobe to convene thought leaders and creative communities in a range of cities. The event was hosted by the BBC at Broadcasting House in November and included presentations from top Adobe executives including David Simons, the inventor of After Effects.

Six MDX students from the BA Animation and Graphic Design courses took part, competing against students from Central Saint Martins and alongside staffers from various BBC departments. The challenge was to create an ident for inclusive arts and media training charity Wac Arts within a three hour time limit. Aghaizu worried that his input would be ignored by the professionals, but quickly struck up a rapport with his teammates, working calmly and patiently together despite having a computer that kept crashing: "We forgot there was a competition. We just wanted to get it done, reminding ourselves to keep it as simple as possible" he says.

Having chosen MDX because he wanted a course with an equal emphasis on physical and digital animation techniques, Aghaizu says he finds the University friendly and supportive, with tutors there when you need help. He hopes to make full use of the arts department's range of resources - in ceramics, metalwork, jewellery and sculpture; he makes music with R&B, electronic and world influences that he matches with his animations, and he is seeking to build his brand as a visual and audio artist.

Two Animation BA graduates and one current student had the opportunity to create a one minute film to represent the message of the Violent Crime Prevention Board for the launch of the Board in September. Their work fused data on serious violent crime with real stories to give life to the issue. Co-chair of the VCPB Dr Angela Herbert who visited MDX with Neville Lawrence to see rough cuts of the film said: "The mood, expression, timing were brilliant. Dr Lawrence and I were excited and completely blown away by the way the students who worked tirelessly through the summer met our specification to the minutest detail".

Loki Fellows, who graduated in the summer and is now working as a Junior Motion Graphic designer at Mindful Education alongside her collaborator on the project Callum Welch said: "Naturally, we had a lot of ideas, there are minutes of animation unseen from this project. One day we went to work at eight in the morning and didn't leave until 4am the next day". Loki and Callum were joined by current third year student Ezra Myers in the latter stages of the production process.

"I wouldn't change my experience at Middlesex," Loki says. "The passion and dedication the teachers have is unrivalled. There are plenty of opportunities to meet new people from industry throughout. Something I came to realise is that you aren't pushed and dragged to success, you're given the tools to build the path to do it, as cliched as that sounds".

In September, Italian National Academy of Dramatic Art graduates presented Reparto Amleto - a retelling of Hamlet where a young man arrives at A&E claiming to have seen his father's ghost - at Middlesex, following MDX students taking devised physical theatre piece Gilgamesh to the Theatre of Rome in June. A run of performances at MDX of Gilgamesh followed in October. Lorenzo Collatti of the L'Uomo di Fumo theatre company said it was "incredible to stay in London and bring [a performance of] maybe the most important text in theatre". He called Middlesex "a wonderful university, very international. I felt the sharing of cultures, the sharing of experiences".

MDX students Jessica Bourne and Laura Singleton who worked on Gilgamesh described the holistic approach of the Theatre Arts BA programme which gives equal emphasis to acting, directing and the full range of technical skills. "Every little strand that I enjoyed [in theatre], I found together" said Laura. "They notice quality in you, they recognise you're an individual. They're always sending out jobs. [They] tag everyone in emails. Even if you don't quite believe in yourself, they give you an extra push".

In October, second year TV production students Federico Favretto and Luke Hyde worked on the international broadcast of the world’s biggest sailing regatta, the Barcolana in the Gulf of Trieste – Federico as Producer and multi-camera Director, Luke as a Gallery PA.

The race, which takes place over a 15 mile course, attracts both professional and amateur sailors competing in a range of divisions and celebrated its 50th anniversary last year. A record number of 2689 boats took part; since such a huge field is complicated and expensive to film close-to, Federico experimented with a feed using augmented reality, user generated content, and shots from a jib on the shore to give viewers a more immersive experience.

“The augmented reality elements really helped us telling the story about the families and the groups of friends who took part in the race” Federico says. “It was very exciting using such an innovative tool for the first time”.

“It was my first time working on an event such as a live sailing regatta and I learned a lot from my experiences, which included all pre-production aspects through to shot calling on the big day,” says Luke. “I had an amazing time and would love the opportunity to work with this talented crew again”.

2018 BA Fashion Comms and Styling graduates Ana Almeida and Chanel Baker had their short film Us, made for a degree project, showcased by go-to pop culture platform Dazed. The film features ten young gay black men socialising and striking poses for the camera in an idyllic setting in Fulham, while talking about their experience of prejudice and a lack of media representation growing up. The film has had about 14,000 views on Dazed's digital platform and almost 10,000 views on its YouTube channel.

Chanel and Ana found the location through Airbnb and the boys through Instagram. “We posted a lot about the project, to try and get as many guys as possible," Ana says. "We didn't have any sort of requirement. Whoever felt like this project spoke to them and (was) willing to start a discussion about it was more than welcome".

Chanel got the idea from a previous university project focused on her brother who is gay, and she had also taken fashion shots of black and mixed race gay and bi men while interviewing them. "I directed this film to represent all people of colour who are gay and to show the world that not all gay black boys are feminine, and being gay doesn’t take away your masculinity", she says. She praises her tutor Alex Mein "for always believing in me and pushing me to do more with my work; he went above and beyond for his students". Having graduated in the summer, she is now freelancing, doing styling, photography and casting work.