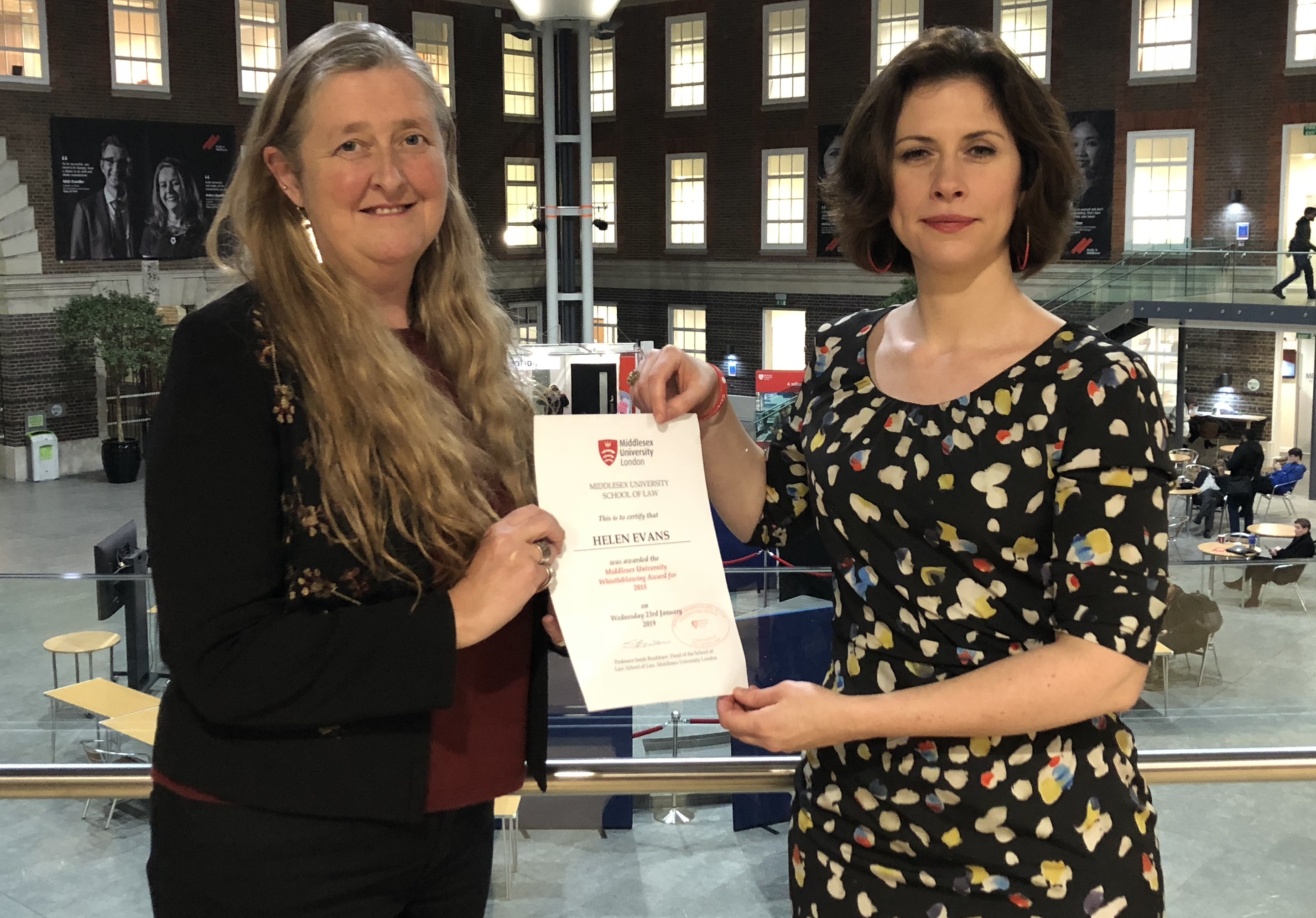 At a ceremony at Middlesex on 23rd January, Helen Evans, former Global Head of Safeguarding at Oxfam, was presented with the MDX UK Whistleblower Award for 2018 by Pro Vice Chancellor and Executive Dean Anna Kyprianou.

Last year, Helen blew the whistle on systemic sexual exploitation and abuse perpetrated by Oxfam aid workers. Her revelations were one of the biggest charity scandals in recent years.

While Helen worked at Oxfam GB she pleaded for more safeguarding investment and quit in frustration in 2015 when her request fell on deaf ears. She took her concerns to the Charity Commission, yet despite the seriousness of her revelations, they took little action. She went public with a Channel 4 News interview in 2018 when the matter came to national attention following a Times newspaper investigation.

Helen's disclosures, and those from others, led to two public inquiries by the International Development Select Committee and Charity Commission. MPs concluded that the aid sector had been guilty of “complacency verging on complicity” and called for a global aid ombudsman and tighter safeguarding regulation.

"The fact that the disclosures led to two major inquiries by the International Development Select Committee is testament to the seriousness of the offences and in no small part down to Helen’s bravery. It is incredibly difficult to blow the whistle and individuals who do so often feel they have no option and have tried all other avenues.  It is essential that they are supported and protected during and after.” Professor David Lewis, Middlesex University

In her speech accepting the award, Helen described her discovery through confidential questionnaires that Oxfam faced an institutional problem of powerful men "targeting women who were least likely to speak"; an internal survey she conducted in 2014 that found 10% of staff had witnessed or experienced sexual exploitation or abuse at the hands of Oxfam employees; and her amazement that Oxfam allocated five times as many staff to investigating fraud as to safeguarding.

She also talked about the backlash she endured after speaking out from people who accused her of being self-serving, neglecting to do her job and allowing children be abused. Of the charity's failure to take action for 16 years after sex for aid allegations emerged in 2002, she suggests, "no one wants to hear that a 'good' organisation like Oxfam has in fact got a dark side. And no-one wants to give more resource, when that will inevitably mean finding more problems".

“The decision to whistleblow was the hardest decision of my life" Helen says. "The impact on my life and my family's life has been considerable. Yet it doesn't come close to the devastating impact of sexual abuse perpetrated by aid workers.

“Despite what's happened I still believe in the charity sector and have confidence the vast majority of aid workers are there for all the right reasons. The sector though must change, and never again approach safeguarding with such complacency". 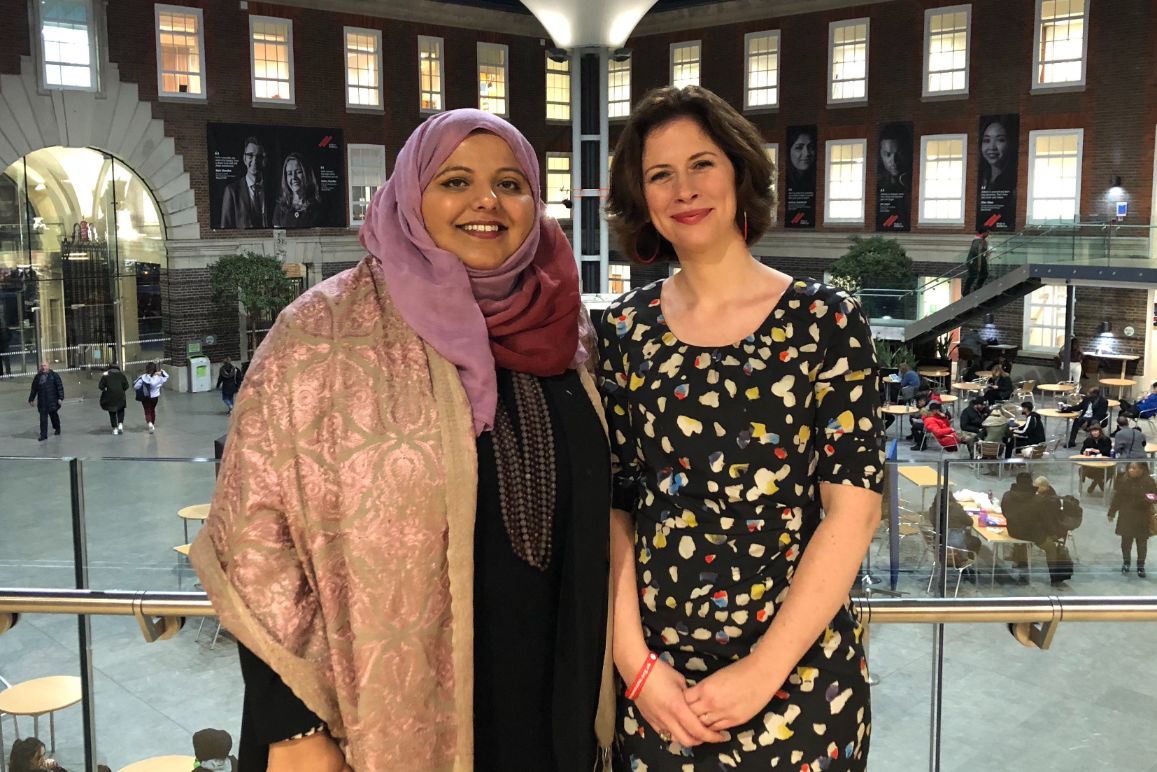 Helen Evans with Safe Space NGO co-founder and fellow former Oxfam employee Shaista Aziz, with whom she is sharing the award

Helen has recently taken up post as Chief Executive of a medical charity and has chosen to share the Award with the NGO Safe Space. This organisation was founded by Shaista Aziz and Alexia Pepper de Caires in March 2018 to gather testimonies on sexual harassment, exploitation and abuse in the humanitarian aid and international development sector, to provide solidarity to survivors and victims, and to seek accountability and redress. Shaista describes Helen as “brave and principled” and adds:

“Her work has no doubt helped many, many women and people impacted by sexual harassment and abuse in the aid sector share their stories, often for the first time. I have personally witnessed some of the intimidation and abuse thrown at Helen for standing up and speaking the truth - it has changed her life and her family’s life. Helen is a phenomenal woman and deserves this recognition. We have no doubt she will use her platform to continue centring the voices of those silenced by the unchecked patriarchal power structures in the aid sector that must be urgently reformed.”

“Helen’s persistence and courage were key factors in her winning this Award” says Professor David Lewis, Head of the University’s Whistleblowing Research Unit. He says:

“Very few people will be unaware of the scandal that rocked Oxfam and other charities last year. The fact that the disclosures led to two major inquiries by the International Development Select Committee is testament to the seriousness of the offences and in no small part down to Helen’s bravery. It is incredibly difficult to blow the whistle and individuals who do so often feel they have no option and have tried all other avenues.  It is essential that they are supported and protected during and after.”

“It is also essential that academics teach tomorrow’s lawyers and managers about how to make whistleblowing arrangements work effectively. For this reason Middlesex has begun teaching a postgraduate module ‘International whistleblowing law and practice’ and we are the first university in the UK to do so.”

The Middlesex UK Whistleblower Award has been running since 2012 and was set up to change attitudes so that whistleblowers are recognised as heroes rather than villains.

Find out more about studying Law at Middlesex