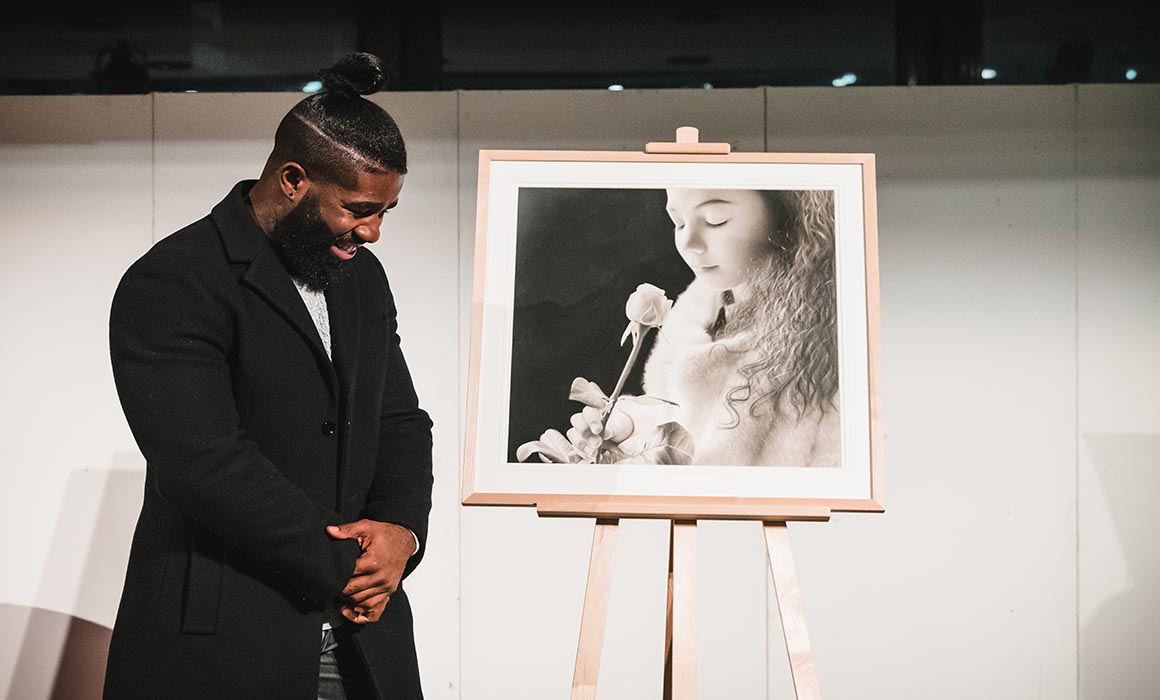 The celebrated photorealist artist and Middlesex alumnus Kelvin Okafor has gifted one of his famous photo-like pencil portraits, ‘Mia’s interlude’, to the University.

At a ceremony held on campus Kelvin said he felt honoured to be back ten years after graduating and to gift the University with  ‘a piece of my soul’.

“Mia was my first subject model after I graduated from here so I thought it would be a fitting gift. I get my inspiration from the moment we’re living in, from the here and now, the beauty and flow of life.

“My message to students is that life is beautiful and challenging.  Meet and face your problems. Be true to yourself and don’t give up.”

‘Mia’s interlude’ is a pencil portrait of Kelvin’s family friend Mia Cadman at 11 years old. Kelvin has been drawing Mia every two years since she was three years old, following her journey through life. After feeling compelled to draw her the first time he met her, Kelvin plans to continue creating portraits of Mia. 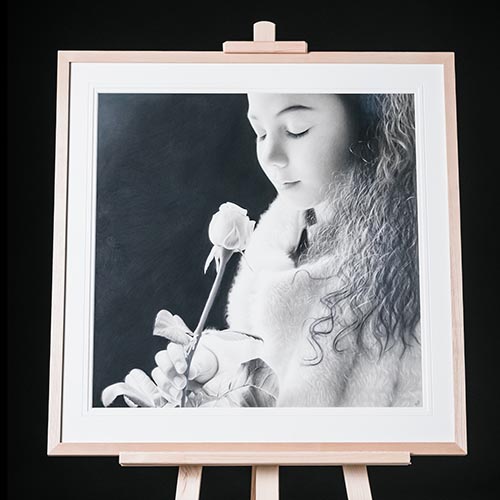 Kelvin described how it had been a long journey since he was paid £150 at his final year show at The Old Truman Brewery for one of his drawings of the lions in Trafalgar Square. “It was £150 but it felt like £150,000.  For the first time I realised this could be my life. I could do what I love doing and make a living.”

“My message to students is that life is beautiful and challenging.  Meet and face your problems. Be true to yourself and don’t give up.” Kelvin Okafor

Since graduating from Middlesex in 2009 with BA (Hons) in Fine Art Kelvin has won numerous awards for his highly detailed drawings which each take more than 100 hours to create. Okafor took the world stage by storm in 2013 and his work has continued to enthral the public and art collectors ever since.

In 2017 he became the first black artist to be permanently exhibited in the House of Commons as part of the Parliamentary Art Collection. His stunning pencil portrait of the late Bernie Grant MP (one of the UK's first Black British MPs) hangs outside the Attlee room in Portcullis House.

Working with nothing more than charcoal and graphite, the 33-year-old Londoner from Tottenham captures the inner essence of his subjects whether they are friends, family or global celebrities like Naomi Campbell, Sir Derek Jacobi or Tinie Tempah. The Guardian art critic, Jonathan Jones, put Okafor alongside past masters Vermeer and Caravaggio.

Art critic and writer, Estelle Lovatt describes Okafor as one of the very best draughtsmen working today who like a great master sculpts a face on a piece of paper out of light and shadow.

Okafor is passionate about capturing the essence of his sitters and spends hours using his art to tell their individual stories. He says:

“I love to draw faces. Each face to me tells an intriguing story regardless of age, gender, race or background. In the process of putting pencil to paper, I begin by drawing in sections/stages. Since I was a child I have always created drawings this way. I visually dissect facial features - I study them and then I put them back together like pieces in a puzzle. This method of creating helps me understand expressions and also helps me appreciate the lengthy process each portrait drawing takes.”

“It is absolutely thrilling to have Kelvin back here and see his work in The Grove.  He says he’s honoured to be here but we’re the ones who are honoured.   We are so proud of what Kelvin has achieved.”   Professor Carole-Anne Upton, Executive Dean, Faculty of Arts & Creative Industries, Middlesex University