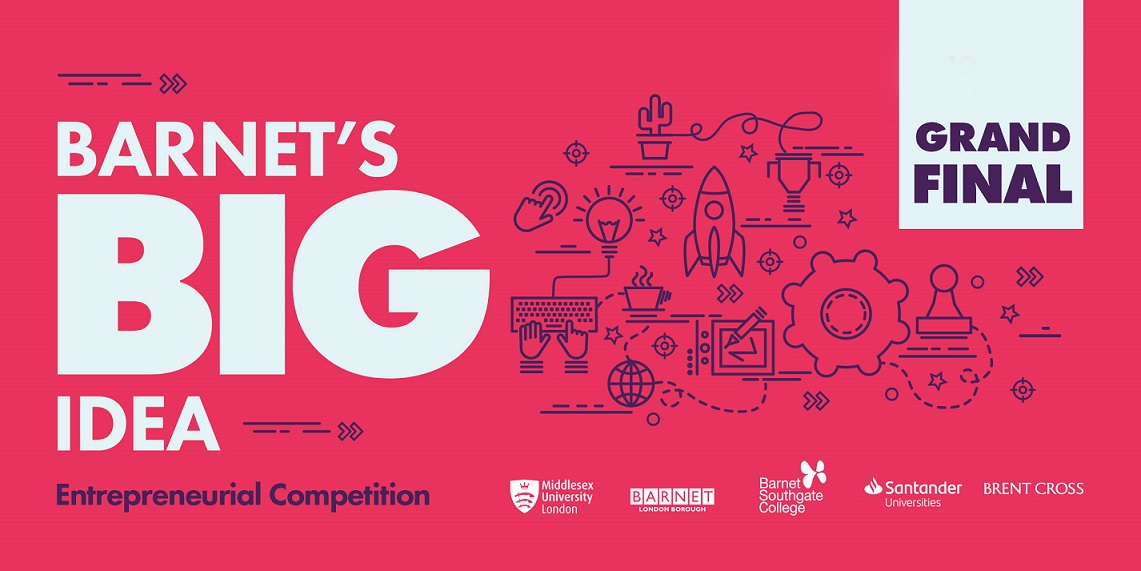 A MDX student is among the finalists for Barnet's Big Idea: a competition run jointly by MDX, the London Borough of Barnet and Barnet and Southgate College for start-ups less than two years old and new business proposals.

The competition, previously known as Entrepreneurial Barnet and now in its seventh year, is generously supported by Brent Cross (part of Hammerson plc) and Santander Universities which have each given £5000 towards a £10,000 prize fund for the winners. Also supporting the contest are accommodation provider The Stay Club Colindale, which has provided rooms for workshops, and communications agency CDS.

This year has seen nearly 100 entries from MDX students and graduates, Barnet and Southgate College students and Barnet residents - once again a record. Over the past three months, participants have been through a rigorous selection process: an elevator pitch for the first round, then submission of a detailed business model canvas or equivalent business plan following workshops held by Santander Universities at MDX in February.

- MDX student Carlo Del Mazo with Fashion X Robots (FaRo), which uses a robot to build a fashion garment from a computer model or replicate a miniature or full-scale fashion sample transferred to the robot's software by 3D scanning

- Barnet resident Annabel Ashalley-Anthony, whose Melanin Gamers promotes diversity in the gaming industry by organising panels at conventions, hosting conferences and building links with organisations which can offer internships

The judges for the final are Steve Leverton, founder of Cornmill Associates and a mentor and coach; Simon Poulter, Relationship Manager of Santander Universities; Paul Anderson Walsh, co-founder of the Centre for Inclusive Leadership and an author, broadcaster and life coach, and Vanessa Fernandes, a marketing and business development consultant and MD of NAYA London Ltd.

Marie Farmer, who won first prize in Entrepreneurial Barnet 2018 with the proposal for her App Mini Mealtimes said about the competition: "The support you receive throughout the process is wonderful. It gives you an extra boost of confidence and will validate your idea.”

Leader of Barnet Council Cllr Daniel Thomas said: “It’s great to see so much entrepreneurial talent in our borough. We are proud to be able to promote and recognise the entrepreneurial spirit of people in Barnet in this way.” And MDX Corporate Engagement Consultant Helen Emberton said: “We thank Hammerson for their continued support of such an important initiative. We are delighted the competition has attracted so much interest from both the University and across the borough. We are continually impressed with how much talent and innovation is out there.”