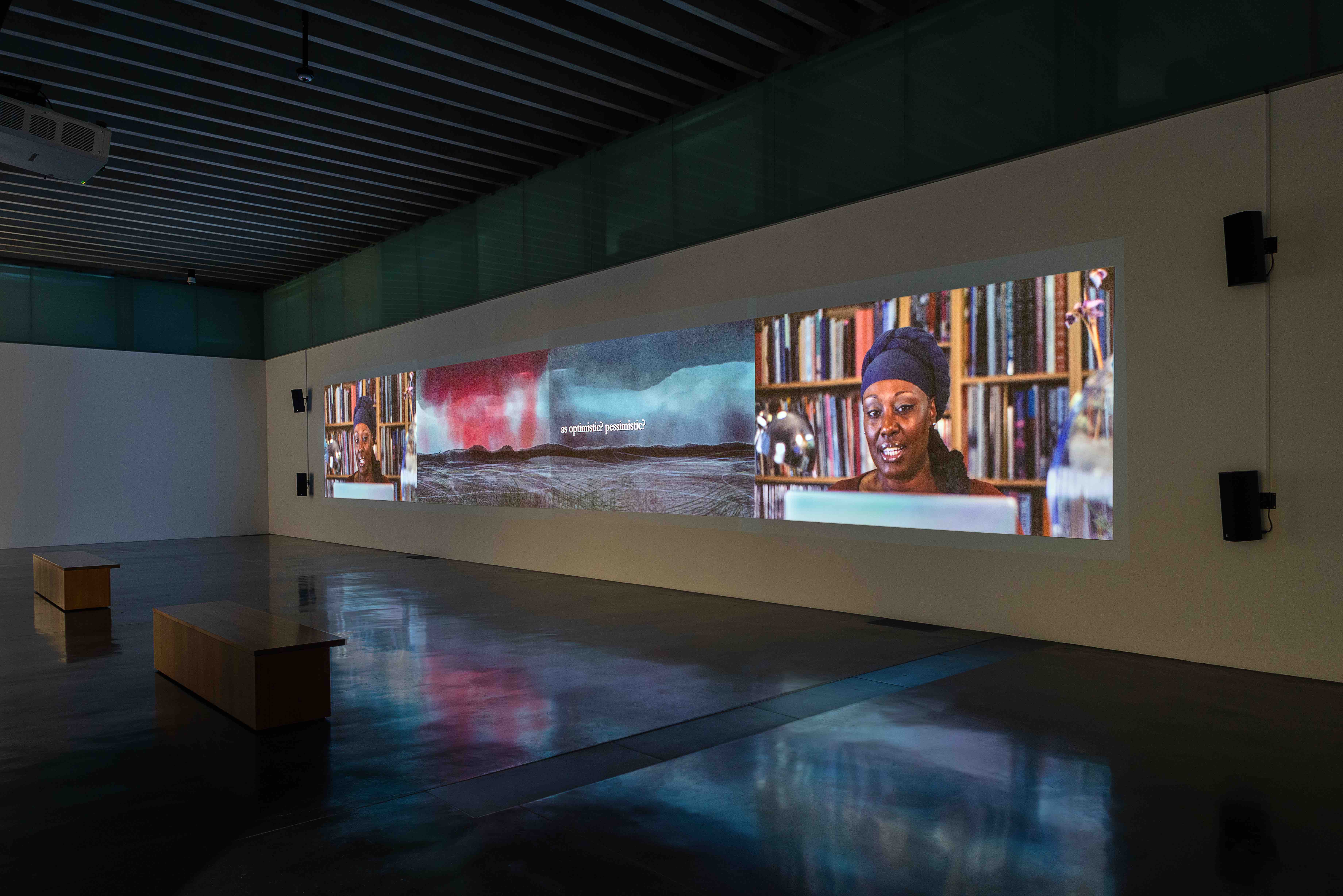 The works on show are part of an ongoing project, also called Jet Black Futures, exploring "race", futurism and technology in an age of anxiety and spanning artworks, text and interventions.

Video installation In Search of Four Horses is centred around Zoom interviews with a diverse range of people who tell journalist Kassandra (played by ) their predictions about the future. Kassandra is a reimagining of prophetess Cassandra as a contemporary researcher-narrator-poet figure – “scholarly, forensic and systematic,” says Keith, instead of the hysteric of Greek legend.

In the background is a monochrome landscape and scratched line drawn animations of the Four Horsemen of the Apocalypse, inspired by Jean-Michel Basquiat and other artists, and a mournful string melody plays.

“I've always been interested in allegorical storytelling” says Keith, who previously made politically-charged works about the Four Horsemen in the 1980s. 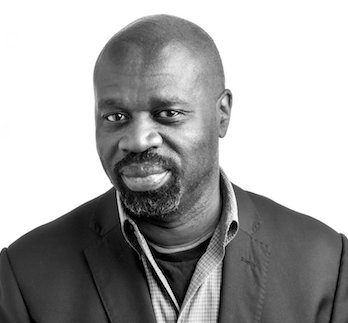 He found the interviewees for In Search of Four Horses through an appeal on his Facebook wall – 80 people responded, “some people I hadn’t seen for decades, some ex-Middlesex students,” from which he chose 12 subjects.

“I told them this is a conversation, I'm not looking for any particular point of view. I just want to hear what you're going to see [in the future]. We were talking for a very long time,” Keith says. The future visions range from hellscapes of surveillance and catastrophic climate change, to the philosophically ambivalent.

The interview subjects were originally intended to be members of a young creative collective in Luton called Revoluton Arts (without an “i”) but that was shelved because of the pandemic. “The young people are of an age when they are thinking about uni; the project interlocked very much with MDX” says Keith.

The plan is for Jet Black Futures to transfer to Luton contemporary art space Departure Lounge and other venues in the town later this year to re-establish the connection with emerging young creatives.

Keith caught Covid in the final stages of making In Search of Four Horses over Christmas 2021, which he says jokingly was “interesting” and influenced how the work turned out. “Without question,” he thinks lockdown has been damaging, but he also reflects on a sense the pandemic will have "cultural reverberations for a long time" – the opportunities of no longer having to be in the same space as someone to have a productive meeting, and the reinvigoration of social life because "we will go out specifically because it's good to go out".

The title work in the exhibition is 16 banners with a mixture of hand and digital painting and drawing and photomontage, on a theme of prophecy and end times. 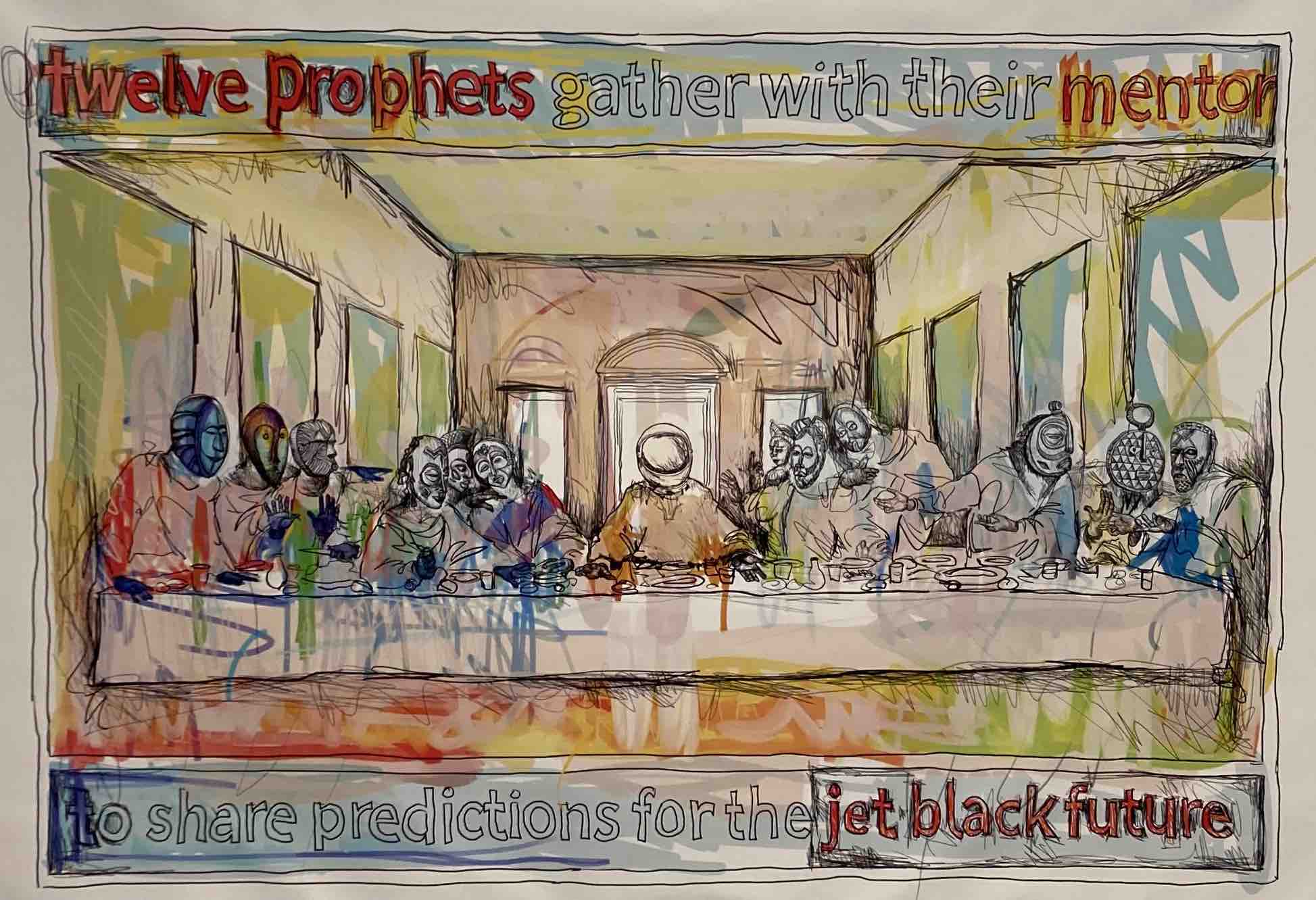 In an interpretation of the Last Supper, twelve disciples in African masks gather around their mentor, who wears a spaceman’s helmet. Other banners foretell Revelation-like phenomena, chiming with current racial and climate justice debates - "the borders dissolve"; "the sun draws close"; "the monuments are repurposed".

Each prophecy is framed by images of the artist’s hands, while a border of expressive hands around each banner spells out “I See A Jet Black Future” in US Sign Language. 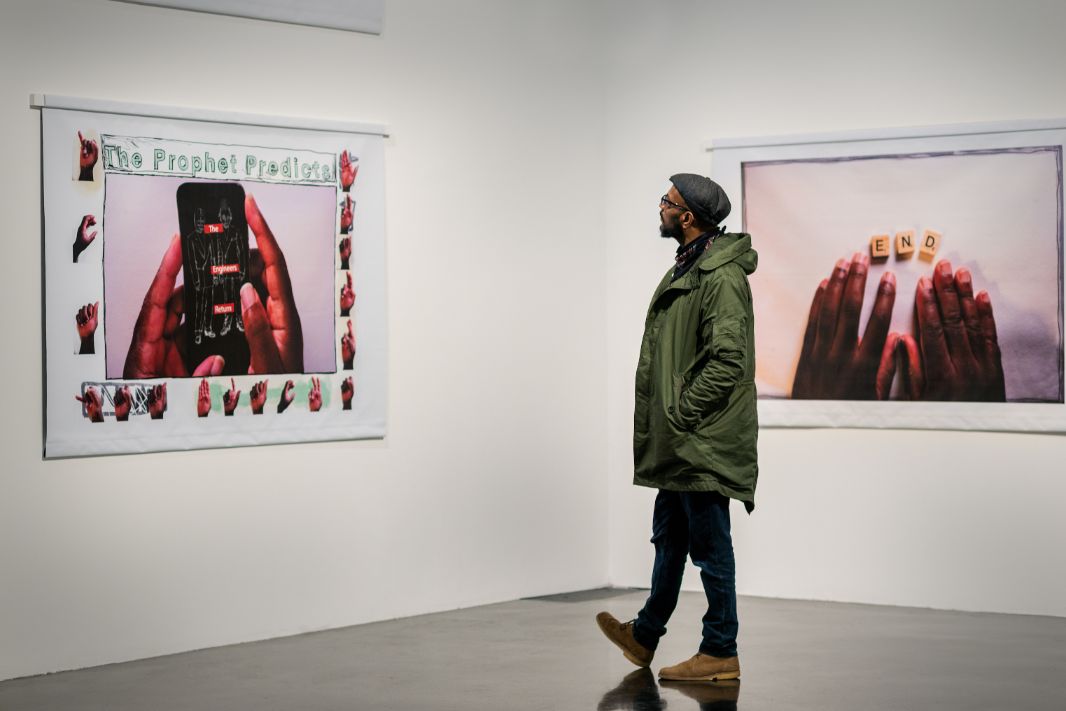 In neighbouring rooms are prints of mocked-up science fiction novel covers, nodding to another longstanding major interest of Keith's, and a 1991 computer work, Surveillance: Tagging the Other, reflecting on anxieties in the run-up to signing the Maastricht Treaty about the sidelining of black citizens in the new EU, and about the use of technology to monitor people’s movement.

"There's a whole range of responses to the European project," says Keith about the prescient concerns of Surveillance. When he was making the work, he felt a connectedness with diaspora communities across Europe such as black people in Germany and the Netherlands.

He felt strongly about the 2016 referendum campaign and the fallout, “because you could see where the impulse for Brexit was coming from… Everyone from around Europe and the world was in London. Now we’re beginning to see the consequences of a rise of the old nationalisms”. Going forward, he predicts that “we'll become more aware of what's been lost. Rejoining may not happen, but there are more ways of rebuilding that will”.

As an artist, Keith is deeply involved in excavating the past with an appreciation of the intricacies of history. He sees present controversies in a context and is fascinated by their roots and development.

"Themes like racial anxiety have been made more explicit through Brexit and the election of Trump," he concedes – but "dig back to the politics of the 80s and there were huge issues then: nuclear war around the corner, apartheid. There are clear continuities that I think we need to bear in mind, of the struggle against racism but also the regearing of the backlash. I'm really interested in ways of reading this through.”

When it comes to the statue of Edward Colston being pushed into Bristol harbour during the Black Lives Matter protests, Keith's reaction is in a spirit of inquiry. “It’s really important to continue to sharpen our understanding of history, and part of that is the scrutiny of objects and to understand how they [were] created,” he says.

Surveillance's inclusion in the exhibition charts, and In Search of Four Horses pays tribute to Keith’s use of Amiga computers as a key production tool in the late 80s and early 90s, as a platform for montaging videos and a way to experiment with "trembling" images and scribbled lines. (After that he moved on to Apple Macs).

Keith says he is “fascinated by what the art of the future will be [with] the rise of robotics and computer intelligence". Far from the arts being squeezed out by tech, he anticipates a golden age as “lots of people with lots of time of their hands will be interested in creative practice".

He sees a vital, enriching relationship between “being an artist and interacting with emerging artists through teaching".

At MDX, where he has been an Associate Professor since 2006, he suggests how important it is to engage with the "specific history of Hornsey College of Art, a particular tradition in terms of an approach to art practice, part of radical conversations about society... We’re not just a small art department; we’re somewhere where people interested in a particular kind of practice come”.

Meanwhile Keith has work from the 1980s on show in Tate Britain’s new exhibition Life Between Islands, about West Indian artists who made their home in the UK. He sees it in a tradition of significant survey shows exploring the relationship between the Caribbean and creative practice and drawing attention to the impact of black artists in postwar British art - it’s “very nice to be in [the] show,” he says. 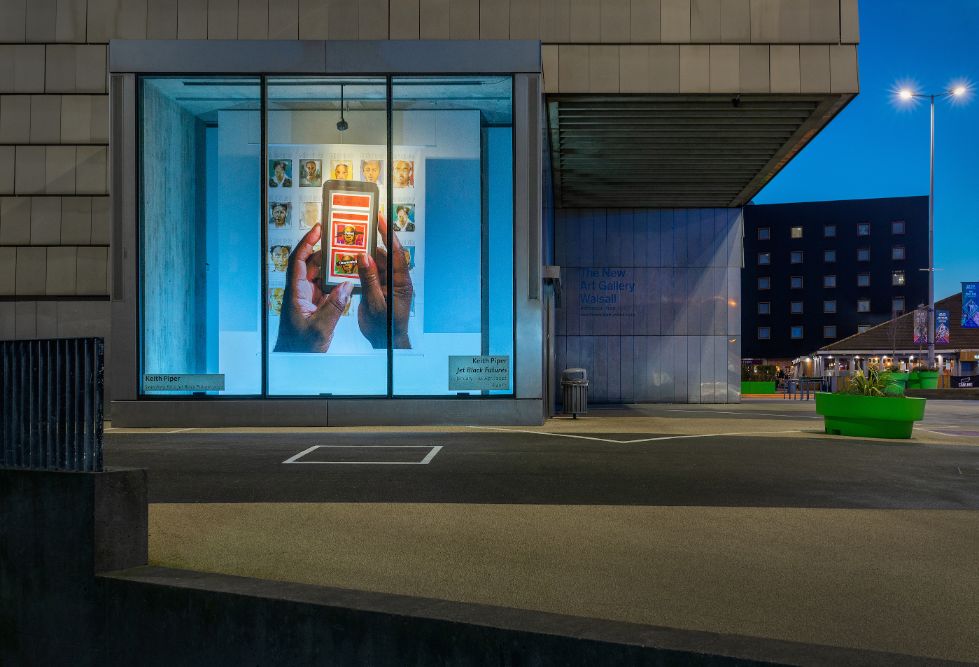 Of Keith's banner Searching for a Jet Black Future in a New Art Gallery ground-floor window, showing a black man’s hands Googling ‘young + black + male’ on a smartphone, Frieze magazine says the results "speak to the hostility that exists within the pathologization of news reports, policing and governance.

"Searching for a Jet Black Future offers a reminder of the power that regional galleries have in engaging us with artists’ practices that speak beyond the confines of the exhibition to address the commonalities of our shared present".

"There is no doubt that Keith Piper has made an indelible mark on the relatively recent history of art. He continues to compel and to challenge us through his powerful and hugely relevant work. It is a great pleasure to be able to share this body of new work alongside some key moments from the past".

Life Between Islands runs until 3rd April at Tate Modern and Jet Black Futures until 24th April at the New Art Gallery, Walsall

To find out more about studying Fine Art at MDX, click here