Middlesex gave me the confidence to pursue my ambitions. Performing arts is a tough profession and the lecturers showed us it was possible. They encouraged us to get out there and go for it.

News reporter and TV presenter Faye Barker discovered her passion for being in front of the camera in our very own TV studios. She conducted her first ever interview for the university newspaper. Currently presenting and reporting for ITV News, Faye has had a hugely successful media career since graduating in 1996 with a BA in Drama and Performing Arts.

"During my TV work, I often tap into the performing arts skills I learnt at Middlesex – from basic voice work and breathing techniques to storytelling. Even though the news programmes are factual, I still have to think of engaging ways to tell the stories. I took TV production modules during my degree and used the University studio a lot. I also learnt technical skills like video editing – I still do that today in a more digital form.

"I've been fortunate to interview big names, like Hugh Grant and Hilary Swank. 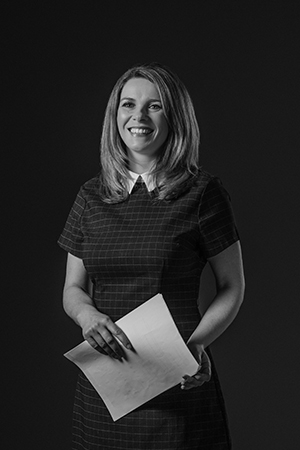 I've co-presented with amazing broadcasters, including Eamonn Holmes and Alastair Stewart. And I now share a newsroom with inspiring role models, like Julie Etchingham and Mary Nightingale.

"But the real highlights of my work are the ordinary people I get to meet, from all walks of life, who happen to be doing exceptional things. I once interviewed a woman whose son died running the Great North Run. He was only in his 20s. Her strength was quite humbling. I'm always inspired by the children I meet too. They might be facing real challenges, like illness, but they battle through. The way they just get on with things is unbelievable."

We were encouraged to push boundaries

"I was invited back to Middlesex University recently to take part in a TV show the students were making. It was amazing. I was so impressed with them. And the equipment was as good as what we use professionally.

"The nature of my degree course meant I was surrounded by lots of creative people – lecturers and students. At Middlesex, we were encouraged to push the boundaries of creativity, to think more widely and look at things in alternative ways. That philosophy was what initially appealed to me about Middlesex. It felt a bit more 'future forward' than the more traditional universities.

"A lot of the lecturers were working actors or practitioners. Performing arts is a tough profession and they showed us it was possible. They encouraged us to get out there and go for it. Middlesex gave me the confidence to pursue my ambitions."

Why shouldn't it be you?

"I always wanted to be a TV presenter, but I didn't get to present anything for a few years and I got knocked back quite a lot. With hindsight, I was a bit too young and inexperienced in my early 20s. But I took opportunities to work as a writer and production journalist and just be in the news room environment, which I loved, until the chance to present with Five News came along.

"I'd say to students wanting to get into television 'Yes, you'll get setbacks, but don't give up easily. Remember somebody has to do that job, why shouldn't it be you?' What you're studying is really important, but at the same time, enjoy the environment and meeting people from different backgrounds. Embrace and enjoy this part of your life."