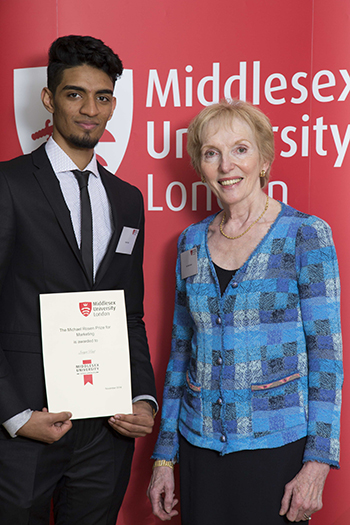 Middlesex University BA Marketing student Inayat Patel has been given the Michael Rosen Prize for Marketing, which was established in 2010 in memory of former governor Michael Rosen, who served the University for many years.

'Inny', as he is better known in his role as a Middlesex University Student Ambassador, was deemed a worthy winner of the £1,000 prize by Mrs Rosen, widow of Michael (pictured with Inayat), and Anna Kyprianou, Pro-Vice Chancellor and Dean of the Business School.

Commenting on being chosen for the prize, Inayat said: "The scholarship is about so much more than just a financial reward; it's about recognition, appreciation and motivation.

"Middlesex's approach to actively seek out its high achievers and reward them is very comforting, as it is a testament to the fact that hard work and commitment does not go unnoticed."

Inayat, who accepted his award from Dame Janet Ritterman at the annual Middlesex Scholarship Ceremony last night (12 November), is also confident that having the prize on his CV will catch the eye of employers in the future.

"It adds depth to my academic credibility and has definitely encouraged me to want to continue delivering my very best," he added.

Only the highest achieving UK-based Marketing students are eligible for the award. Nominated students must then submit a 500-word personal statement outlining why they deserve to win the prize.

The Michael Rosen Prize has been funded until 2020, giving Marketing students something extra to aim for during their studies for many more years to come.

You can read more about Inayat's Middlesex experience on his blog 'Where's Inny'.