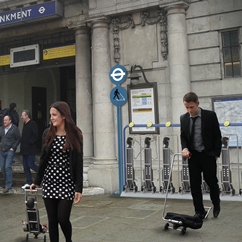 Both a scooter and a baggage carrier, the TransBoard will allow commuters to glide around cities more quickly and easily. It can also be used for easy travel in walking traffic and is an alternative to cycling for people who prefer the safety of the pavement.

The invention is designed to fit into secure ports at multiple destinations, in the same way that 'Boris Bikes' are stored and displayed ready for use.

Someone wanting to hire a TransBoard would simply tap their Oyster card on a reader: This would release a TransBoard for use and automatically process the small hire fee.

Richard invented the TransBoard in response to the rising number of people living in UK cities and the challenges associated with this. He explained: "We all need to use public transport as much as possible. There's often gridlock on the roads, and driving into many cities can be a nightmare.  I believe the TransBoard could be a really convenient, sustainable and environmentally friendly tool to tackle congestion."

Richard would love the opportunity to pitch his idea to Transport for London - or even Mayor Boris Johnson. He adds: "My dream scenario would be to see the TransBoard rolled out all over London, just like Boris Bikes are.

"There have been lots of great London transport developments recently - like the introduction of the new Routemaster buses. I think the TransBoard could play a part in this new wave of innovation!"

In the future, Richard is interested in working on eco-friendly vehicle design, and on mobility projects more generally.

Richard exhibited his design in central London at The Old Truman Brewery in June.

You can find out more about the TransBoard here or watch a video about it.  Richard can be contacted on Twitter @rc721Chapman.