Research highlights the needs of an ageing Irish population in Britain 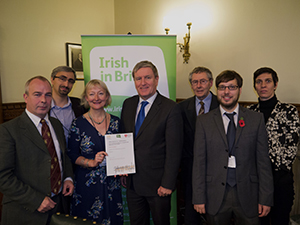 The report details the relative decline in numbers of Irish migrants coming to England since the 1990s due to the strength of the Irish economy and increased employment opportunities at home. However emigration from Ireland has started to increase since the recession and the collapse of the so-called 'Celtic Tiger' economy. This has helped replenish an ageing population of people who identify as Irish in Britain.

Middlesex University's Professor Louise Ryan, Neil Kaye and Alessio D'Angelo presented their findings to The All Party Parliamentary Group on the Irish in Britain and Ireland's Ambassador to Britain Daniel Mulhall.

The report includes a suite of seven detailed reports that breakdown the reams of data on the Irish in Britain that was generated by the 2011 Census. It was commissioned by Irish in Britain and completed by Middlesex University's Social Policy Research Centre.

Middlesex University Professor of Sociology Louise Ryan said: "The Irish in England are disproportionately old compared to other ethnic groups.  This has many consequences as our report shows - older Irish people are likely to suffer poor health, and there are particular consequences for care provision - with significant numbers of people requiring care.

"It is important that their contribution to this society is recognised and that their needs now in old age are addressed.  There are clear policy implications for service providers in England.  In particular, social isolation needs to be addressed through schemes that provide not just physical care but also emotional support and visiting/ befriending to lonely older people."

Sean Hutton, Policy Officer at Irish in Britain said that "The Census presents a unique opportunity to understand the position of the Irish community on Britain in relation to other communities, examining internal differences within the Irish community, and highlighting both our community's achievements and its needs. This makes it invaluable to local and central government and businesses, as well as to voluntary and community services."

Ambassador Mulhall welcomed the launch of the reports which he described as an 'invaluable resource' for Irish focused organisations across Britain. Paul Farrelly MP for Newcastle-under-Lyme who chaired the event spoke of the many possible connections that British people of Irish Ancestry could have and how the Census Reports were an essential tool in preserving our stories beyond word of mouth.