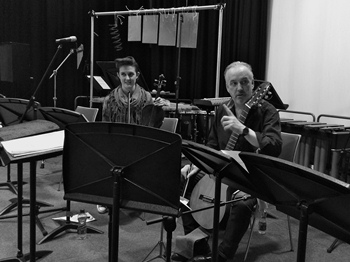 SacrumProfanum projectmade its world premiere at the Belfast Book Festival on 9 June, following four years of painstaking research across Ireland, Wales and England.

Created by Middlesex University Professor of Music Benjamin Dwyer and poet (and Middlesex PhD graduate in creative writing) Dr Kimberly Campanello, SacrumProfanum is an artistic response to their research into the enigmatic Sheela-na-gig stone carvings.

The naked female figures prominently depict the vulva, and are found on medieval churches, castles, wells and town walls, with over one hundred carvings in Ireland and around thirty-five found in England, Scotland and Wales.

With SacrumProfranum, Dwyer and Campanello approach the Sheela-na-gigs through the aesthetics of damage, excavation and assemblage, drawing upon 'found' text, visuals and music to evoke the carvings' potential meanings.

It is a huge body of work, and something Dwyer acknowledges has mushroomed from Campanello's original doctoral study of the Sheela-na-gigs. Her book of poetry inspired by the carvings, Strange Country, will be published in September by The Dreadful Press.

To realise the project, the duo have brought together an innovative and dynamic team of musicians and artists to engage with themes engendered by the Sheela-na-gigs including identity, politics, (post-) colonialism, feminism and ritual.

"Myself and Kim are composer and poet, but our work is strongly influenced by our in-depth research. We've been really delving into this from many angles – feminist, political, socio-cultural, anthropological – and that is one of the reasons that it has grown so much," he says.

"We have also pulled in the work of others such as American filmmaker Dylan Griffith, artist Glenny Köhnke and photographer Tony Carragher to create an exhibition of art works and manuscript scores, which really broadens the anthropological and artistic elements – it really is a huge project." 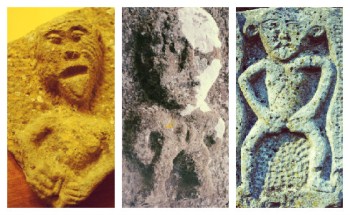 As well as exposed vulvas, Sheela-na-gigs are generally bald, and they often have deeply furrowed brows and foreheads with emaciated bodies.

Typically found on medieval churches, castles, wells and town walls, over 100 have been found in Ireland and around 35 in England, Scotland and Wales. Their meaning, dating and origins are disputed, but most scholars suggest that they were carved between 1000 and 1500 AD.

"We don't know how old they are," says Dwyer. "Confirming their origin is also difficult as they've been stolen, moved from place to place, and found damaged in in river beds and buried in fields. There are many theories as to their origins, but no particular one can be verified as fact.

"At a certain stage the Catholic Church banned them, which isn't really surprising as they likely represented a type of 'dangerous' femininity. We have situated the Sheela-na-gig as an icon through which to confront contemporary themes that affect women today."