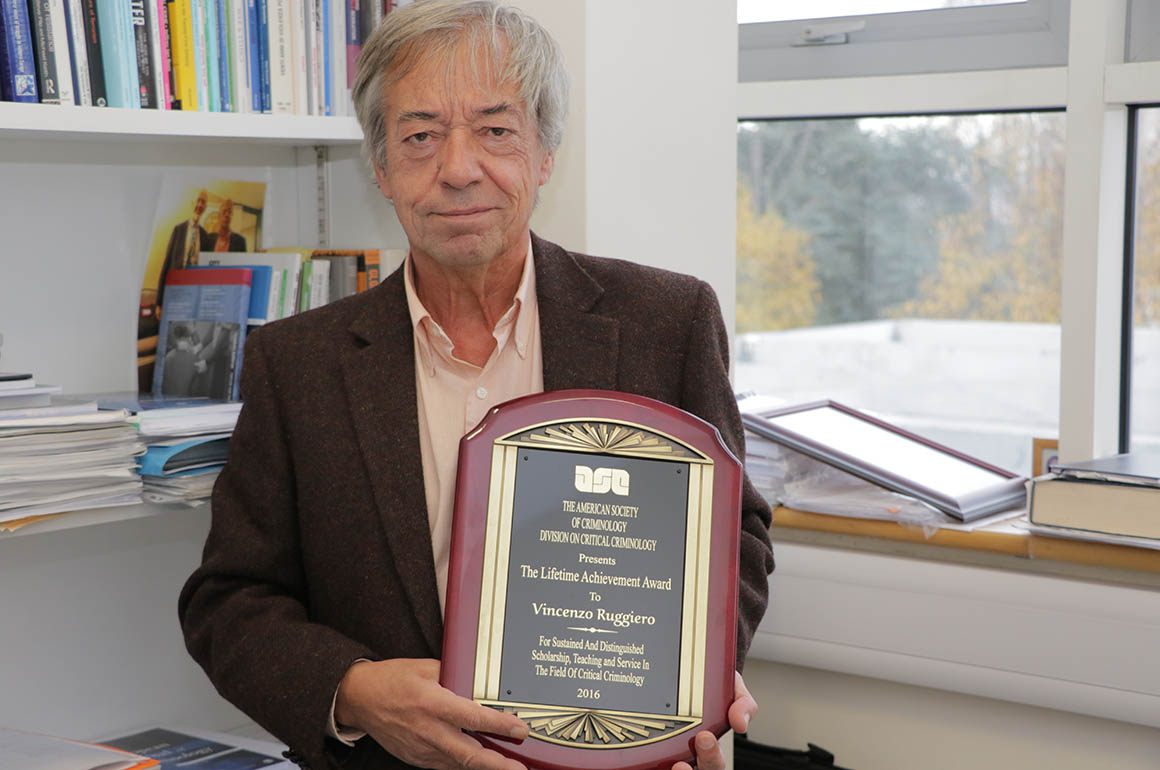 Vincenzo Ruggiero, Professor of Sociology at Middlesex University, has received the 2016 Lifetime Achievement Award from the Division on Critical Criminology – part of the American Society of Criminology (ASC). The award honours an individual’s sustained and distinguished scholarship, teaching and service in the field of critical criminology.

Professor Ruggiero travelled to New Orleans for the society’s annual awards ceremony, where he was presented with the plaque and made a short speech about his passion for criminology.

Since joining Middlesex as a Senior Research Fellow in 1991, Professor Ruggiero has published 27 books (authored, co-authored and edited) and numerous academic journal articles. He has conducted research funded by the Home Office, the Economic and Social Research Council, the European Commission and the United Nations.

“Since the time of unforgettable stars such as Stan Cohen and Jock Young, criminology at Middlesex has been celebrated across the world for its original and critical approach, I’m proud to be contributing to that,” Professor Vincenzo Ruggiero

In his acceptance speech at the ceremony Professor Ruggiero said his passion for critical thought has been the driving force behind his career.

“I would say the most important thing for me has been promoting critical thought in criminology, quoting Malcolm X, by any means necessary,” he says.

“Even in adverse situations and conditions, even when I had a grant from the Home Office, or the United Nations, I still promoted my critical thought in criminology.”

Speaking on behalf of the ASC, Dr Raymond Michalowski congratulated Professor Ruggiero for the award, saying it is well deserved.

“This is a significant compliment to the impact of Vincenzo’s contributions to the advancement of critical thought in criminology insofar as we had many strong candidates this year.”

The Department of Criminology at Middlesex has a long history of distinguished lecturers – Professor Jock Young previously won the ASC’s Lifetime Achievement Award in the 1990s.

Find out more about studying criminology at Middlesex