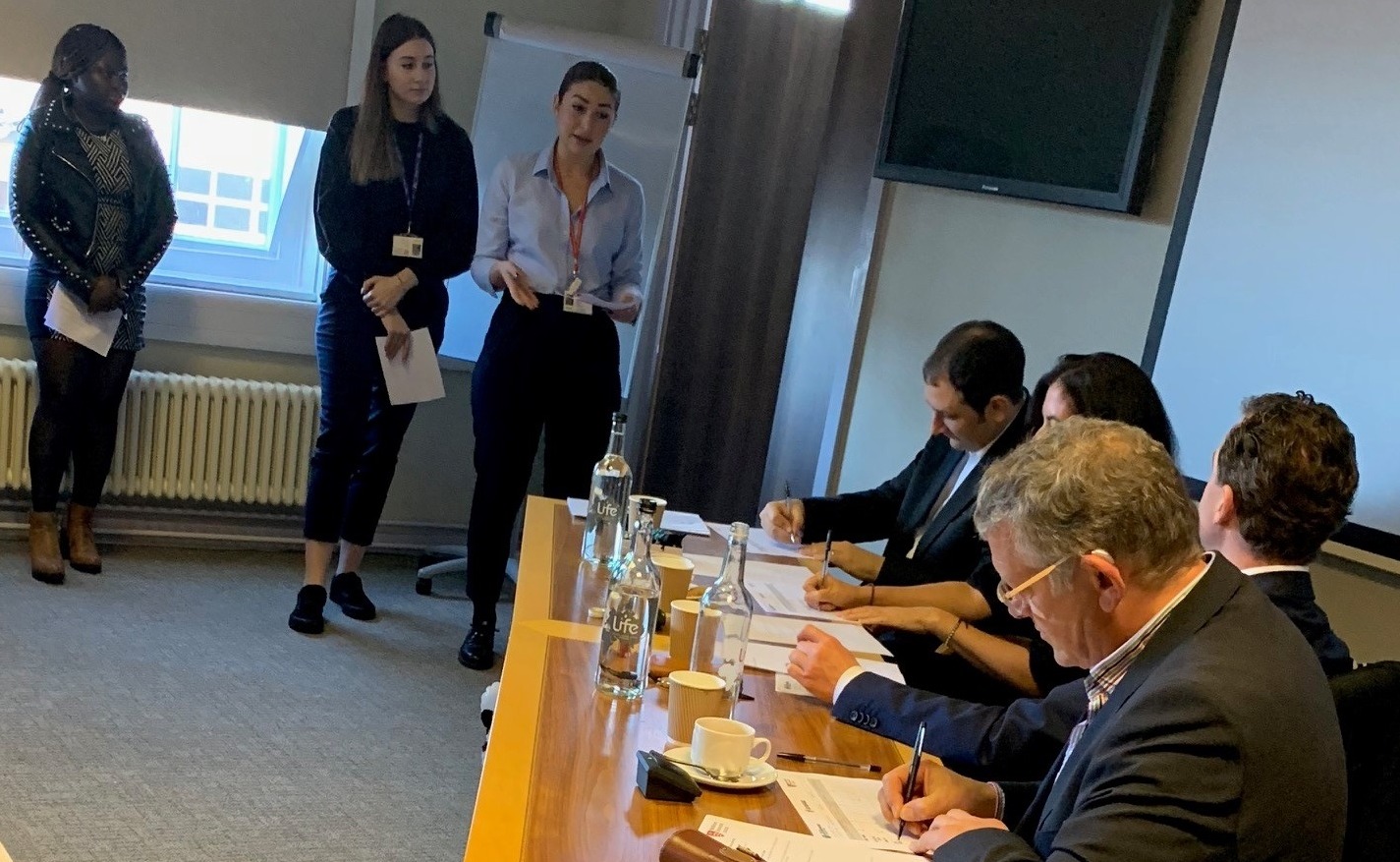 On 12th November, the beginning of Global Entrepreneurship Week, 62 students in teams of up to five presented pitches of their business ideas in the Boardroom. The other rounds of the competition involve submitting an online business plan and an eight week trading phase, for which successful business ideas are given £75 in seed funding by the Foundation. The winners will attend a Buckingham Palace reception next May hosted by Foundation sponsor HRH Prince Andrew the Duke of York and Peter Jones CBE.

Tycoon has run in schools across the country since 2012, with the aim of inspiring young people to become entrepreneurs. Middlesex had been approached through the University’s Corporate Engagement Consultant Helen Emberton, previously Head of Curriculum and Commissioning for the Peter Jones Foundation where she was responsible for the Peter Jones Enterprise Academy syllabus.

“We are delighted to be launching our first Tycoon Competition for Higher Education with Middlesex University” says Peter Jones. “I look forward to seeing the students’ business ideas come to fruition. I have no doubt that the initiative will provide a strong platform for them to develop a broad range of enterprise skills and put their entrepreneurship to the test”.

"I've always enjoyed opportunities that allow me to get out of my comfort zone. I've faced a lot of adversity in life and the only way I've overcome it is by being persistent and resilient".
Tycoon competitor Firat Bektasoglu

Yahya Tali, working on a pitch for a holistic accessories business called HeALiVA under team leader Viktoria Skljarova said, "To get first-hand experience on how it feels to pitch in front of investors has been an amazing experience. I was very nervous but enjoyed every minute of it.

"What excites me about business is that it’s one of the keys to financial freedom - I’m big believer that owning 1 percent is far greater than 100 percent management”.

Firat Bektasoglu is always fascinated to know how and why a business started. "I have a great passion for entrepreneurship", he said. "I've always enjoyed new challenges and opportunities that allow me to get out of my comfort zone. I've faced a lot of adversity in life and the only way I've overcome it is by being persistent and resilient".

Umukulusum Sillah Sillah made her pitch based around an idea she has long had of transforming African designs into European styles. Her interest in entrepreneurship is around its power to bring about social change. "For example, the name of my business is Maanyi, which in the Ganda language spoken in Uganda means strength, power and energy, which is want we want to bring to society".

Zana Sadik Mahmoud said "anything is achievable if you practise and work hard. Presenting on Monday boosted my confidence".

Senior Lecturer in Management and head of the MDX Enterprise Development Hub Dr Simon Best has embedded the competition within a business start-up module he has run at Middlesex since 2011, considering it an ideal fit.

The module is designed to be as much about practical experience as possible. “We do the practice and then get the students to understand critical and relevant theories,” he says.

“They are asked critical questions, they’re challenged all the time. Things happen that they don’t expect and they’re forced to rethink their direction.

“We get some resistance from students as it goes through. By the time we get to the end, we generally have a very high approval rating because they begin to realise the value of what they’re learning, and the feedback we get two or three years after students have graduated is very positive.

“For a long time I’ve wanted to make this real. [Now] Tycoon’s come along”. 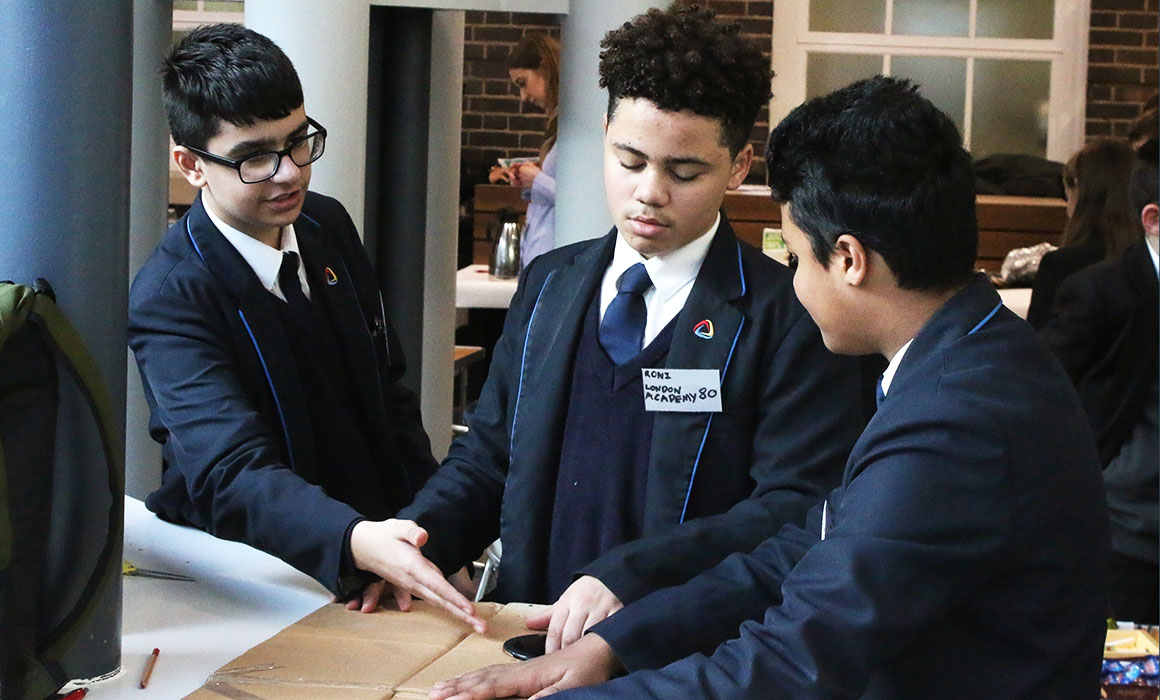 Also taking place during Global Entrepreneurship Week was the Junior Entrepreneur Competition for Year 8 pupils at local schools, which Dr Best devised in 2012.

Teams from ten schools were given a real cash budget and tasked with buying cardboard packaging and tubes as raw material, creating a target practice arcade game and working out the price per throw. After setting all the games up around the fountain in the Quad, each team had to persuade students passing through to play their game over one of their rivals. At the end of the session, the teams were marked on whether they opened and closed on time, profit, customer satisfaction and correct completion of documents.

Ella from Enfield County High School said, "We've learned you have to [follow] instructions" and that "people do not want to spend money unnecessarily". Shamir from Totteridge Academy, who won a prize certificate, said the competition was testing because students were generally busy heading to lectures, and the time limit made it tough: "We never thought time was that precious until now". Gemma from St Mary and St John’s Church of England School, Hendon, said Simon made it “difficult” because “he was trying to challenge us”.

Among the Middlesex Master’s students supervising the competition, Janet Enang, who runs a childrenswear business alongside her course, said the pupils “had so much fun - they've created games from nothing, had to make decisions and learned marketing. There's a lot more learning in doing than in just being taught". She praised Dr Best’s entrepreneurship module for covering such a broad range of business skills. Her coursemate Maryan Adan, who hopes to open a social enterprise focused on education, said she'd been inspired by the schoolchildren developing their negotiation skills.

To find out more about the Business School at Middlesex, click here