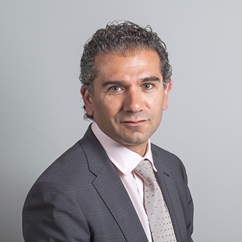 Every day is different at the Bar. If I am in court I am up early depending on the case and what I'll be doing. Sometimes I work from Chambers or at home preparing cases, drafting advices, submissions and doing legal research. No two days are ever the same.

What was it that drew you to the Bar?

It was the drama of the courtroom, the jury trial the real sense of defending the under-dog. The fact, also, that you are ultimately responsible for the decisions and conduct of the case. I also wanted the intellectual challenge of pitting my wits against opponents and judges.

What do you find rewarding about working in Law?

No doubt about it, the fact that you can have such an impact upon an individual's life. You can take a case from the first instance all the way to the Supreme Court or the ECHR and play a direct part in making law.

What are the biggest challenges?

Presently the Treasury's attack on legal assistance in public funded work. We are in the process of dismantling our excellent justice system. In every modern state the mark of its humanity is based upon the quality of its justice. In contrast I just returned from Kazakhstan where the state is keen to put over a billion into its justice system and looks to ours for inspiration.

What have been your proudest achievements to date, or the most exciting cases you have worked on?

I have been involved in some of the highest profile and most complex cases we have had in the past 15 years, from terrorism to human trafficking, murder and corporate fraud. Cases that have taken me to other countries and have been widely reported in media. My proudest moment was being called to the Bar at Inner Temple – in front of my mum and dad.

How do you feel your time at Middlesex has helped you get to where you are today professionally?

Having previously been a hairdresser I came to Middlesex as a mature student - I was 23. Middlesex gave me confidence. I met tutors who really did want to see you succeed. Its practical application of the LLB was perfect for my later job.

What made you choose to study at Middlesex?

Penny Childs – an inspirational admissions tutor who believed in me.

What skills have been most critical in your career to date? How have you continued to develop these?

There are many, but I would say the keys skills include the ability to work hard under pressure and think on your feet. The need to always listen, think and then engage. Not to feel intimidated by a clever opponent or judge, and significantly the ability to gain the confidence and control of your forum. I am learning all the time.

What would you look for in a recent graduate applying to your Chambers for pupillage?

Whilst academic ability is important with so many applying to the bar, I look for a person who really has thought about being a barrister, what it entails and what they have done by the time they reach interview to achieve that goal. Good results on their own are not enough these days as the competition is fierce. However, coming to the profession from a previous career is no a barrier. The journey is a tough and demanding one, I need to be convinced that the individual before me has all the equipment to deal with that journey but with a keenness to learn.

What would your advice for current students hoping for a career at the Bar be?

Make sure it is exactly what you want, and be focused on the area you want to practice in. The Bar is varied and covers a whole range of areas. By the time you are at pupillage you could be in substantial debt. You need to set yourself apart from the other candidates. You really must want a career in law and demonstrate that you haven't just relied upon your degree. Get out there and get involved in the law, via the local community, voluntary advocacy and representation organisations - a little bit of voluntary work goes a long way. Find an area you are interested in, make it your own, learn about it, write about it, and meet people who work in that area. These days networking is extremely important. I spent a year working voluntarily at Tower Hamlet's Law Centre before I undertook pupillage.

If you could, what one piece of advice would you give to an 18 year old?

Believe that you can achieve your ambition.

What are your plans for the future?

It's the dream of many barristers to take silk (QC). I hope to become a QC. I would then like to take my experience to the rest of world and help other countries see the value of having a good and trustworthy justice system.